RedwoodJS is well-suited for dapp development. In this brief tutorial you'll get an idea why.

In this code-along I’ll walk you through how I used RedwoodJS to create an ethereum app. The key ethereum-related advantage of Redwood is that it is built for graphql. And I don’t just mean like how GatsbyJS is built. Redwood is … really, really good at graphql. If you’re familiar with using TheGraph to build dapps, then this is going to be unicorns and rainbows in terms of opening up the creative mental space.

In a way, you can use Redwood to create your own “poor-man’s subgraph” (as James Young would call it), with very little effort. This is especially thanks to the amazing folks at Prisma, who are heads-down working on their second version, which is what Redwood uses. The time it took to create this app could have easily taken weeks using the original Prisma v1 and Gatsby, but it only took me a couple days here. The Redwood team has created something magical.

Did I mention that the devops flow is STUPID EASY? This all may seem daunting at first, but trust me - you will quickly come to love Redwood.

I know, I know, you’re having TheGraph withdrawal symptoms just thinking about leaving them. Luckily, you can still plug those sweet subgraphs directly into Redwood. After tackling your first app using native Redwood tooling, you’ll be able to add TheGraph with confidence.

So what are you waiting for? Give it a go!

But Patrick, what are we building?

Here are the rough steps I took to create Emanator, a hackathon submission for the recent Superfluid hackathon hosted on Gitcoin.

The basic idea is this:

👩‍💻 Setting up the App

The following redwood commands do a bunch of tasks to save time, without getting in the way like some code-generators and templates you may be familiar with.

That last commands sets up all the routing we need so we can navigate to a particular auction using an identifier. In this case we call it “auctionAddress”.

Update schema.prisma to add the auction object. I just made up some stuff I thought would be useful- since the contracts weren’t written yet.

Now we can create our local development database

Finally we will use schema.prisma to generate some components for us.

This command also provides things for edit/& delete functionality (blockchain is immutable?) so I removed these components and routes from routes.js

Boom! A working frontend & backend. We should now be able to create new auctions by entering dummy data.

Now we need to add functionality to deploy the contract when the Auction form is submitted. Once we can deploy a new auction, we can use the contract address and owner address to populate our database. 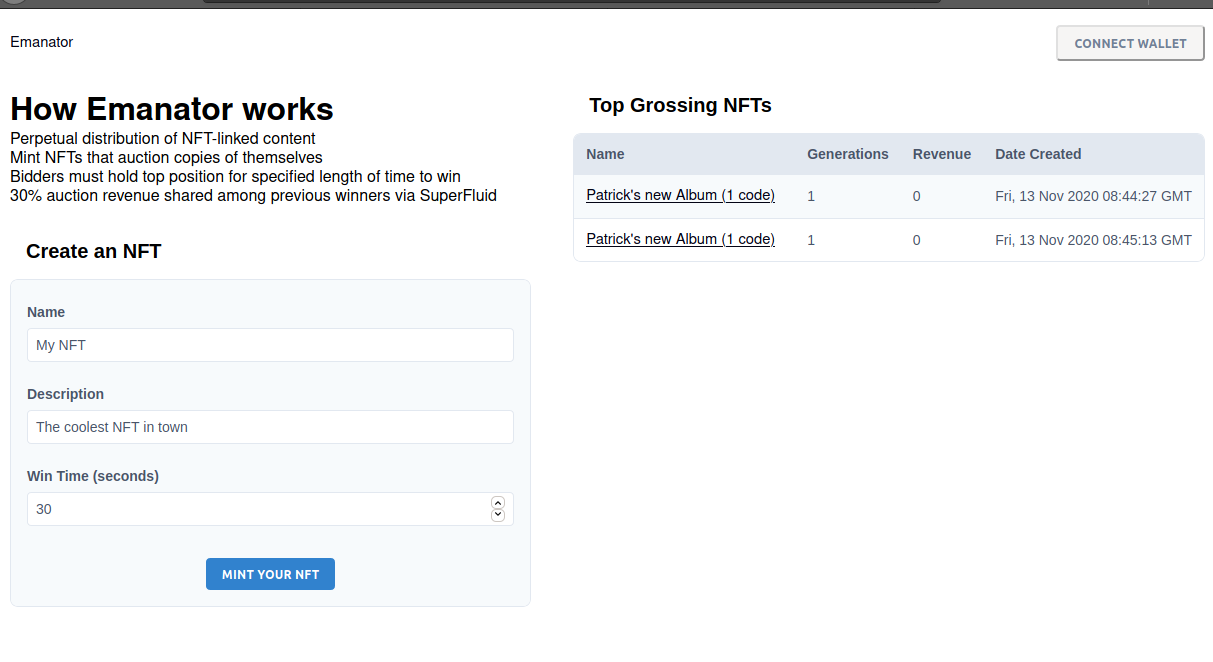 I added the web3 deployment function to web/src/web3/deploy.js which takes the form data and deploys a contract from the user’s wallet. The return values from deployAuction() are then added to the existing Auction mutation like this:

Now that we can deploy a contract, we need to get web3 data into our app. I took a page from the Redwood cookbook Using a Third Party API to do this. I choose to use the server, rather than the frontend, to make Web3 calls. Doing it this way makes things muuuuch simpler.

Why? Because Redwood is very very good at consuming graphql data. So if my server can just spit everything out in graphql format, then the app won’t even know that it’s asking for slow, asynchronous web3 data. It also means better security. Remember how you aren’t technically supposed to put your Infura/provider keys in the FE… but everyone does it anyways?

To start, I made a new SDL called “Web3”. Define the schema in web3.sdl.js.

Here I did not follow the Redwood established pattern of naming the SDL and Services by graphql Type (eg. “Web3Auction” and “Web3User”)

Note: Since web3 data is external to our database, we do not need to update our graphwl schema.prisma. Additionally, we cannot use the yarn rw scaffold command since it relies on schema.prisma.

Add the Web3 calls using web3/ethers. Then we can start writing some queries in the graphql playground at http://localhost:8911/graphql

Now that we have some new web3 queries, there are two ways to use them depending on our data source: web3, or web3+web2

For Users I only care about web3 data, so I chose to make a new cell and component. Remember that since prisma.schema isn’t defined for these, you will need to manually add the beautiful graphql queries you wrote earlier to each new “Cell”.

For Auctions I wanted to use data from both the Prisma Database and web3, so I elected to add the new query to the existing one in AuctionCell.js. I did not make any new components for this. 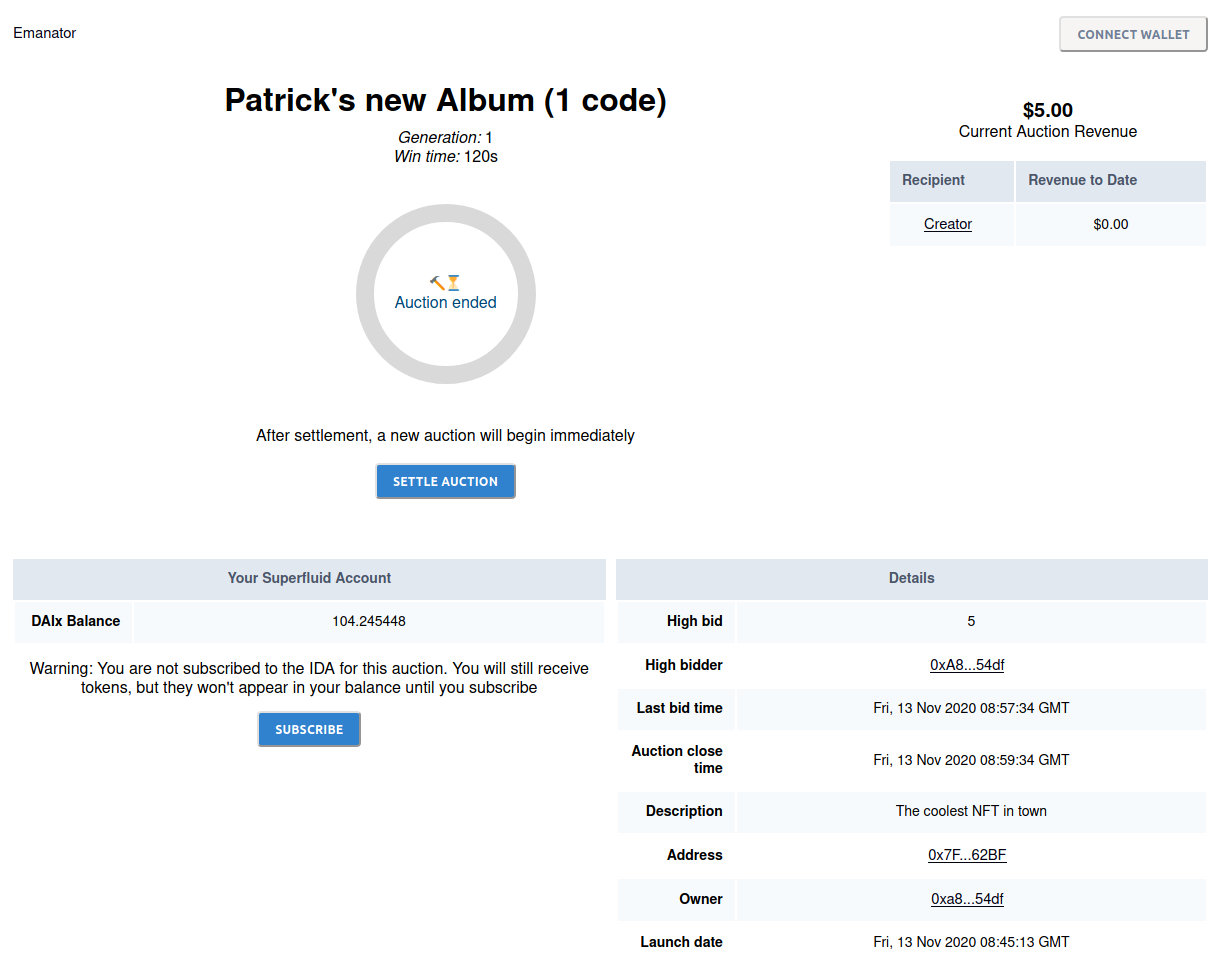 As a quick and dirty way to keep the app updated with Web3 data, I added the following function to Auctioncell.js and Web3UserCell.js (see Generating a Cell). This causes ApolloClient to poll every 5 seconds, and not rely on cached data, so the server must actually make the web3 calls again. This could be done a better way, but it works for now.

🏅 Challenge - Keep the Database in sync with Web3

Right now, when a new auction is deployed, the database is updated immediately, without waiting to see if the deployment is successful. A better solution would be to wait for the deployment to succeed before creating the database entry. If we write this logic in the frontend, the user may close the page before it can finish, and the database will not include the freshly deployed auction.

Instead we should send the deployment details to the server, which will wait on the pending transaction before processing the mutation. I’ll leave this up to you to think of a good way to implement this.

I used Heroku for the database since it was fast+easy and this was a hackathon. I just followed the Redwood tutorial here. For the serverless component, things got a little tricky.

Since Redwood is not in production yet, and this is my first time using it, I met a couple of challenges here. None of which were out-of-the-ordinary, and I was able to overcome all of them after some help from the community.

The first issue I encountered was that yarn rw build was not building my contracts. I solved this by adding to the build command:

I scrapped this effort (for multiple reasons), and checked the built contracts into version-control and updated the package.json accordingly. Its hacky, but its simple.

Next, Vercel complained that my serverless function was too large by about 5mb. Thanks to some helpful advice from the Redwood Discord, and some Github issue hunting, I learned of a tool to help find the culprit. I discovered that truffle was eating up a ton of space. I moved some things around, and tried again.

In the end, I had to self-host the app using pm2 + nginx. Thankfully there was a cool example provided in the Redwood docs. I am really looking forward to my next redwood app, so I can apply the things I learned here!

Hit me up if you want some DAIx so you can bid on an NFT!

Does Redwood have an emoji? Would it be 🌲?

❤️ If you enjoyed this article, please let me know. Seriously, click a big button below.